Bankruptcy Filings Are Up for 2017 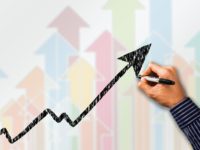 Chapter 13 filings are up by 6.3% over the previous year’s filings. There were 2,609 Chapter 13 bankruptcies filed over the past 3 months in total.

It is also interesting to note that Chapter 11 filings, which are usually used by businesses with significantly higher debt amounts, has decreased by 13% over last year.

What Does All Of This Mean?

There are a few things we can conclude from these numbers.

Consumers are having more problems with debt than businesses

Since Chapter 11 is mostly used by businesses, we can see that businesses are doing well and filing less bankruptcies. On the other hand, consumers are filing more than last year. This may be a sign that consumer spending in the past few years of economic prosperity in the United States in general may have led to some spending that consumers could not manage. Businesses seem to be profiting from consumer spending, yet the profits have not trickled down to the consumer this year.

Holiday spending may have been a contributor

It is possible that, in an economy with a positive outlook, consumers may have filed bankruptcy due to overspending since these statistics are coming immediately after the New Year. Since job numbers and salary numbers have been trending up, it is possible that the positive outlook may have caused some overspending by consumers which eventually led to a slight increase in filings.

Putting It All In Perspective

Looking at the longer term past can help put all of these numbers in a better context. In 2006, real estate in Southern California was booming and we all saw economic prosperity. Chapter 7 and Chapter 13 filings reduced from previous year’s filings by 82.1% for Chapter 7 and 17.9% for Chapter 13. When the economy and the real estate started to turn in 2007, we saw increases in bankruptcy filings rise to astronomical numbers. Chapter 7 bankruptcy increased by 79.9% in 2007 and Chapter 13 filings increased by 142.5% from the prior year. The Great Recession was in full effect by 2008 where the Chapter 7 and Chapter 13 filings continued to explode by another 92.7% and 92.7% respectively. The following year continued to increase in consumer bankruptcy filings although more moderately all the way up to 2011 when the numbers began to stabilize. Compared to these tumultuous times over 10 years ago, a 5-6% increase can hardly be seen as anything significant. We can assume that people still see bankruptcy as a good solution to eliminating debt and are continuing to utilize it for its obvious effectiveness.

If you or someone you know needs help with filing a bankruptcy, contact Bankruptcy Law Professionals at (855) 257-7671 for a free consultation.