Debt That Does Not Discharge In Bankruptcy 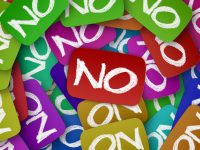 When paperwork is filed at the beginning of a bankruptcy proceeding, most debt that was incurred previous to the bankruptcy filing is subject to discharge in the bankruptcy except for some specific types of debts.

Student loan debt is not usually discharged by any bankruptcy filing. However, there are certain circumstances in which it can be discharged if certain criteria are met. If repaying the loan will cause extreme hardship on either the debtor or the debtor’s dependents, then it may in fact be able to be discharged. The challenge becomes the actual definition of a hardship which can be interpreted various ways depending on the bankruptcy court. (Learn more about discharging student loans here)

Additionally, none of the following debts are dischargeable:

• Taxes, such as federal, state or property tax
• Child support and alimony, including any amounts in which the filer is in arrearages (Chapter 13 can, in some instances, temporarily stop collection of these)
• Fines and penalties that have been imposed by the government or government agencies
• Debts that are a direct result of damages incurred by others while driving under the influence or as a result of any other criminal activity
• Embezzlement debt, or debt from larceny
• Debt incurred by means of willful, malicious acts by the filer
• Any debt incurred as a result of a divorce settlement or court decree that would place more of a hardship on the recipient than the debtor
• Condominium dues/fees
• Pension debt
• Debt left over from a previous filing of bankruptcy which was also not dischargeable
• Mortgages (if you still own the home)
• Court fees

As with any legal situation, there may be certain stipulations regarding your personal circumstances. It is therefore advisable to contact a bankruptcy attorney who can answer your questions regarding nondischargeable debt and other filing questions. Bankruptcy Law Professionals has offices in Orange County and Riverside to serve you. Contact us for a free consultation at 855 257-7671.