Household Debt Composition Today Looks A Lot Different Than The Past 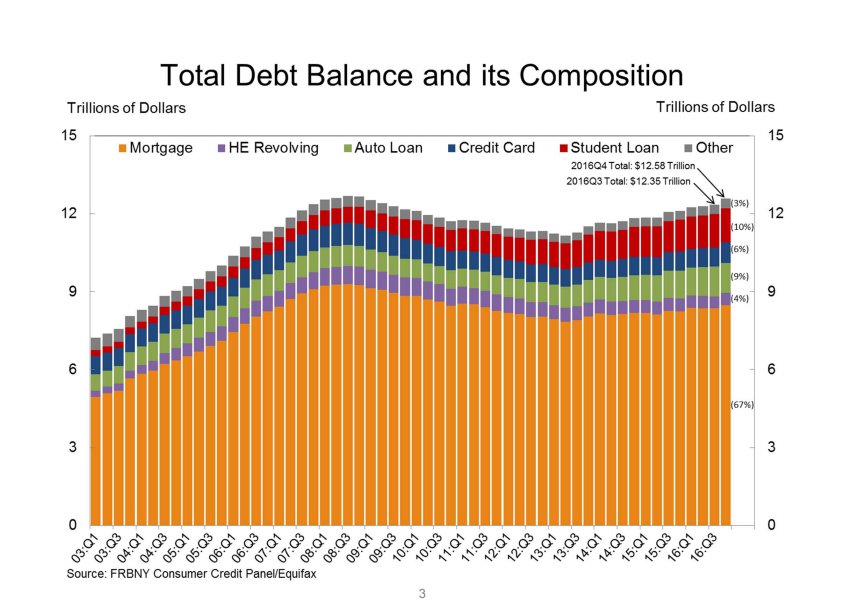 Household debt has reached higher levels than before the Great Recession, but today’s debt has new characteristics that make it much more different than pre-recession times.  Home mortgages were a major factor in the debt crisis of 2007-2008.  Mortgage default in the following years caused economic turmoil that can still be seen in the current housing market. It is widely accepted that the American economy has recovered from the Great Recession.

What Do Current Debt Levels Tell Us About Consumers?

When uncertainty motivates a consumer, the tendency is to take less risk which means take on less debt. A high confidence level in the economy motivates taking on more risk and more debt. High confidence translates to confidence in employment opportunities and job security. Debt doesn’t seem like a large risk when you feel confident that you will be able to manage the payments in the future. Is this the reason why consumers are reaching new levels of debt today? It might be, but the above graph from the Federal Reserve Bank of New York may tell a different story when yo look at each component of household debt.

Where Are Households Taking on Debt

Total household debt reached $12.58 trillion by the end of 2016. It is not surprising that the largest component is home mortgages at 67%. Housing costs are very high and the priority to own a home is also high. Spending more than half of what you earn on housing is the average choice among American households. We can see in the earlier years that percentage of debt being spent on housing has always been a major factor, but not always at this high of total debt levels.

It might be surprising to see that student loans make up the next biggest piece at 10% of the debt. Student loan debt is taken out at a time in people’s lives when the economic condition may not be a huge factor in the decision to take out the debt. It is doubtful that consumer confidence is a big player in the decision to take out student debt. It is most likely that self confidence may be a bigger factor. It is easy to imagine that taking out a student loan would require the self confidence to be able to complete your academic goals and enjoy the fruits of your labor in the job market after college.

Total debt amounts look similar to the years preceding the Great Recession, but today’s debt looks different from 2007 to 2008 years. We can see that the most significant difference is the red band of student loans. The next most salient difference visually is auto loans. The auto industry is experiencing a boom in the current economy and this may be due to lenient lending standards and terms of the auto loan. Housing expense looks a tad lower than pre-recession, but not by much. Credit card debt and home equity debt look nearly the same if not a bit smaller piece of the pie than 8 years ago. These are the most notable differences, but what does it all mean?

What Does Household Debt Tell Us?

Current components of household debt tells us that we are prioritizing our homes as always, but, today, we prioritize our education and the cars we drive. We’ll have higher degrees and nicer cars to drive us to our jobs that we secured because of the degree that hangs on the wall. The future will only tell if earnings from the jobs secured will help pay off the student loan debt incurred.

The biggest lesson learned from the graph is that Americans didn’t learn to stave off dependency on debt since the recession, but instead have shifted debt to different categories. Even though we are spending more on education, we are still spending the same amount in total debt.

If you or someone you know is having trouble keeping up with debt payments, contact Bankruptcy Law Professionals to schedule a consultation with a bankruptcy attorney. We can be reached at (855) 257-7671.