Paying Student Loans With Other Debt 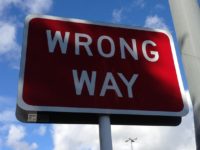 The Faulty Plan In Detail

So, let’s say John has $50,000 in student loan debt from 5 wonderful years in college. Unfortunately, his job out of college isn’t allowing him to keep up with paying a mortgage on his condo in Los Angeles and living the post-college lifestyle of his dreams. If John could get rid of his student loan payments, he thinks he would be much happier because he would be able to spend more money at the bars instead of staying at home and dwelling on his student loan payments.
What to do?

AHA! John comes up with an idea. He heard that bankruptcies can completely discharge debt. He could get rid of his student loan forever! But then, he does more research and found out that you can’t really discharge student loans in bankruptcy unless you have a disability that doesn’t allow you to work. Ok, think, John… think. AHA! John knows that credit card debt can be discharged in a bankruptcy. He has two credit cards with $15,000 credit limits and two credit cards with a $10,000 limit which totals up to $50,000. He can charge up the credit cards to pay off all $50,000 of his student loans and then file a bankruptcy to discharge the debt! Ok, then… let’s do this!

So, John goes ahead with his plan. He uses 4 credit cards to pay the loans and down goes his student loan payment. Now all he has to do is file the bankruptcy and watch the debt vanish into nothingness.

The attorney makes him a list of reasons why a bankruptcy won’t work:

1. Your income is too high to qualify for a Chapter 7 bankruptcy to get rid of this credit card debt. John makes above the median income level for a single man to file for bankruptcy.

3. You have too many assets. You own a car and a motorcycle. You have stock holdings in a brokerage account. You also have some cash in savings and equity in a condo. A bankruptcy will not be able to protect these assets. Although there are exemptions in a bankruptcy that will allow you to keep some assets, your assets exceed the exemption limits. You will have some of these liquidated by the bankruptcy trustee if you were to file a bankruptcy.

John’s plan has been foiled by bankruptcy rules. Instead of paying student loans with a low interest payment, John is now stuck with high interest credit card payments. There are a few important lessons here:

1. You can’t plan around a bankruptcy:

If people were allowed to plan around filing bankruptcy, everyone would use it to discharge debt, but the fact is that bankruptcy is a tool and option that is able to be used when needed. In order to use it, you need to qualify for a bankruptcy. You really shouldn’t plan to be in a difficult financial situation just to file a bankruptcy. If you are in a tough financial situation, check your options in bankruptcy and see if you qualify, but planning on qualifying will just make your life more difficult.

2. Pre-meditated bankruptcy is not legal:

You are not allowed to charge up a bunch of debt and then file for bankruptcy. There is a human behind the bankruptcy process. This person is called the bankruptcy trustee. They perform duties for the court that include looking at your financial conditions and finding assets that could be valuable. Since your last 90 days of financial history is usually included in a bankruptcy filing, it is fairly easy to see when recent spending looks like it was done as a precursor to a bankruptcy filing.

3. Keep paying student loans if you can:

If you can afford it, continue to pay student loans. Student loans are usually some of the lowest interest rates there are. Make sure to explore any options in forbearance plans if you are having trouble affording payments. Make the student loan payments a high priority.

If you need more information on qualifying for bankruptcy, contact Bankruptcy Law Professionals at (855) 257-7671.